Veganuary – Where to find the vitamins & minerals YOU need 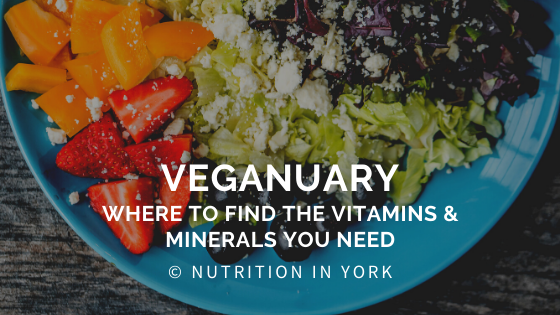 Done properly, a plant-based diet can provide nearly all the nutrients we need to thrive.  I say “nearly all” because of the vitamin B12 conundrum – more on that later.  Done badly, a vegan diet is the same as any other poor diet.

As a nutritionist I come across all kinds of diets.  Vegan, juice fasts, raw food, keto, Paleo, Hay (eating proteins at a different time to carbs, not chewing on actual hay…though no doubt someone will one day, and probably make a ton of money from the idea) – and people ask my opinion of them.

When it comes to veganism, I think it’s great for many people so long as it’s done properly and involves eating real food.  I have several vegan friends and colleagues, including the brilliant nutritionist Elena Holmes, who epitomises the healthy vegan lifestyle.

However, a vegan diet is not;

– The answer to our environmental and food sustainability issues

– The cure for every known health issue

– Easy to follow.  This is especially true if you dislike vegetables and pulses.  And I have met vegans who don’t like vegetables.  Good luck with that.

There are certain nutrients that a wholly plant-based diet can struggle to provide and you may need to consider supplementation to side-step any deficiencies.  Remember that some deficiencies can take months, even years to present with full on symptoms.  Vitamin B12 is a good example of this.  You may have good bodily stores of B12 when you begin a vegan diet, and these stores can keep you going for several months before they drop and you start to notice symptoms like tiredness, brain fog, and poor memory.

The most bioavailable form of B12 is unique to animal products.  It plays an important role in mental wellbeing, heart health, nerve cells, and red blood cell function.

Top sources include shellfish, lamb, and beef (there’s an interesting list on Nutrition Data: it’s a US site, hence the inclusion of moose meat – not a common source for those of us in the UK!). 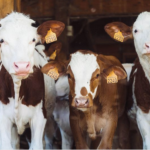 Many foods suitable for vegans are fortified with B12; nutritional yeast and breakfast cereals for example.  Certain plant foods do naturally contain B12, the most notable being the sea vegetables green and purple nori.  Studies have shown that eating these forms of nori can improve B12 status, though you would need to eat substantial amounts every day to support levels in the long term.  Same goes for shiitake mushrooms.  Of all the edible mushrooms, shiitake carries good levels of B12 but you would still need to eat an average of 50g (dried weight) per day to maintain levels.  That’s a whole lot of mushrooms.  To be on the safe side, include these foods regularly and consider using a B12 supplement if you plan to be wholly plant-based for more than a few months.

Spirulina and other edible cyanobacterias (commonly called blue-green algaes) contain pseudovitamin B12 which isn’t bioavailable to us as humans.  We can’t absorb it or use it so please don’t be fooled by advertisements claiming otherwise.

Iron deficiency is a particular issue for female vegans due to regular iron loss from periods.  Haem iron in animal products is much better absorbed than non-haem iron 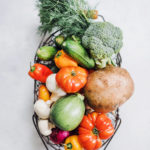 from plant sources.  If you are relying on non-haem iron, be sure to include sources of vitamin C too, as this helps the absorption and usage of plant-sourced iron.

– Millet grain (iron) in a salad with vit-C-rich-foods like watercress, parsley, and peppers

– Pumpkin & sunflower seeds (iron) in a fruit salad with papaya, kiwi, and strawberries (all good sources of vit C)

Many of us, whether vegan or not, are low in vitamin D simply because we don’t get enough regular sunshine here in the UK.  Unfortunately for vegans, the optimum dietary sources of vitamin D3 (the most active usable form) are eggs, liver and butter, with plant sources like mushrooms providing a little D2.

It is advisable for everyone to take a supplement during winter months (October to April) and vegans may need to continue all year round.  To check your levels, see your GP or try a home test kit from www.vitamindtest.org.uk

Vegetarian and vegan diets tend to have plenty of omega-6, but often struggle with omega-3.  Nuts and seeds provide what is known as the ‘parent’ omega 3 fat, Alpha Linoleic Acid (ALA).  This needs to go through several conversion steps before it becomes EPA and DHA (eicosapentaenoic acid and docosahexaenoic acid). These are the omega-3 fats we use for brain and heart health, and which are ready formed in fish oils.

These conversion steps rely on co-factor nutrients like magnesium, B-vitamins, zinc, and vitamin C, and a lot of ALA gets lost during the process.  There isn’t an easy answer to this dilemma, other than to ensure vegans include walnuts, flaxseed oil, and/or pumpkinseed oil everyday for their rich ALA content, and to enjoy plenty of food sources of the co-factor nutrients too;

Are you experimenting with Veganuary this year?

Tell us in the comments below, hop on over to the friendly Facebook Group for more conversations and recipe ideas or catch me on Twitter @nutritioninyork