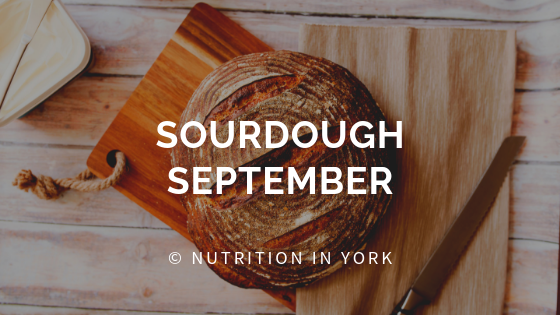 This month-long celebration of all things sourdough is a national event run by the Real Bread Campaign with the aim of encouraging people to enjoy genuine sourdough products and support the independent bakers who produce them.

Now I’m certainly no baker.  I can talk about food, write about food, and on the whole, produce tasty nutritious meals – but baking?  No. No.  And again no.  My skills are seriously lacking.  But this doesn’t stop me enjoying the occasional slice or two of a good quality sourdough bread.  With butter.  Natch.

True sourdough bread contains only flour, water, salt, and the starter culture that triggers the 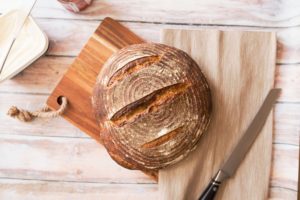 Why are all these ingredients used?

Because of the Chorleywood process.  Since its creation in 1961, the vast majority of bread made in the UK is done so by this process.  It’s a time-saving method of producing dough with minimal fermentation time, and is needed to meet our (apparently) insatiable demand for processed bread.  The process requires all these extra goodies in order to work.  Plus preservatives and mould inhibitors to give the loaf a longer shelf-life.

Baking a sourdough loaf requires time and patience and brings with it an understanding of what real food – slow food – truly is.  The process cannot be rushed, the end results are different every time, but the flavour and taste are worth the effort!

A potential nutritional advantage of true sourdough is the way the fermentation process reduces gluten levels.  The natural bacteria in the starter culture ferment and breakdown a lot of the wheat proteins, including gluten, making them easier to digest.

When buying sourdough do watch out for what the Real Bread Campaign call ‘sourfraux’ – fake sourdough bread.  Thanks to the rise in popularity of artisan breads like sourdough, many supermarkets and bakers are producing imitation sourdoughs that still include additives and haven’t gone through the full fermentation process.  It is worth asking how the bread has been made and whether the proper starter culture has been used, so you can be confident of buying a genuine sourdough loaf.

Do you have a sourdough starter you’d like to pass on?